NORAH has recently helped to fund four exciting drawing workshops for school children at the Norfolk Record Office. The Drawing in the Archives workshops related to an exhibition which took place at The Archive Centre in Norwich from August to November 2017. The artists who ran the workshops used the archives featured in the exhibition as a teaching resource and as inspiration for the children’s drawings.

This project is typical of those NORAH aims to support. It encourages people to engage with Norfolk’s archives, especially those who may not usually do so, to learn about Norfolk’s past and to learn new skills. Furthermore, the workshops also highlight how archives can be used to support the creative industries. 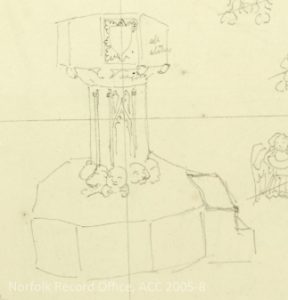 Drawing in the Archives

A key outcome of the University of East Anglia’s Medieval Parish Churches of Norwich project was a public exhibition. Drawing in the Archives:the Visual Record of Norwich’s Medieval Churches 1700-2017 had two aims. The first was to highlight the riches of the remarkable visual record of Norwich’s medieval parish churches. The second was to explore what it tells us about the buildings and their contents.

Aims and achievements of the workshops

The workshops supported the Key Stage 2 section of the Art and Design national curriculum. They allowed pupils to use different materials and encouraged creativity and experimentation. The workshops were led by Norfolk based artists Paul Fenner and Doug Farthing. 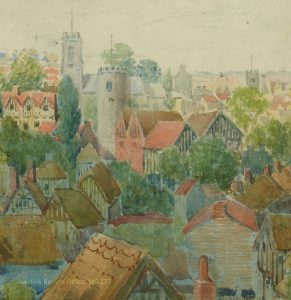 Pupils were encouraged to analyse why particular drawings were created and why they may differ from what the artist saw. They saw the importance of historical drawings as a resource for learning about the past, especially when the the subject of a drawing no longer survived. In addition, the students explored differences between perceptual ways of depicting space and more abstract or schematic representations. Students were also introduced to medieval art and iconoclasm.

Teachers who accompanied the pupils on the visits agreed the workshops were a success. One of the teachers commented, ‘The outcomes were brilliant. The workshop was age appropriate and the drawings were equal or above what you would expect from year 5/6 pupils. The children really enjoyed the different techniques they were introduced to and the workshop really sparked their imagination. They were all engaged, even those pupils who usually struggle.’

Especially telling was many of the schools agreed that without the funding, it was unlikely that they would have been able to attend the workshops. 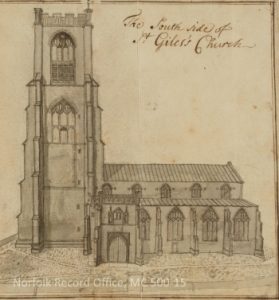 Archives used in the workshops

Unsurprisingly, the Drawing in the Archives exhibition featured many of Norfolk’s archives. These included the following.

This website uses cookies to improve your experience while you navigate through the website. Out of these, the cookies that are categorized as necessary are stored on your browser as they are essential for the working of basic functionalities of the website. We also use third-party cookies that help us analyze and understand how you use this website. These cookies will be stored in your browser only with your consent. You also have the option to opt-out of these cookies. But opting out of some of these cookies may affect your browsing experience.
Necessary Always Enabled
Necessary cookies are absolutely essential for the website to function properly. This category only includes cookies that ensures basic functionalities and security features of the website. These cookies do not store any personal information.
Non-necessary
Any cookies that may not be particularly necessary for the website to function and is used specifically to collect user personal data via analytics, ads, other embedded contents are termed as non-necessary cookies. It is mandatory to procure user consent prior to running these cookies on your website.
SAVE & ACCEPT